Here is what I did with the wonderful fabric!

First, I made a table runner. I picked the fabric in mid-December because it looked Christmasy, but not so Christmasy that it couldn't last through Valentine's day. (Once upon a time K and I didn't take down our tree until March, but that's another story.)

The table runner has took up residence on our coffee table a week or so before Christmas.  After the table runner (which is extra long), there was one lonely strip of fabric left.  I briefly contemplated trimming some red towels which had frayed in the wash (first wash) with the scraps, but that sounded too fancy and, really, if the towels fray in the first wash I don't want to put that much effort into them anyways.

*This* is my sewing machine: 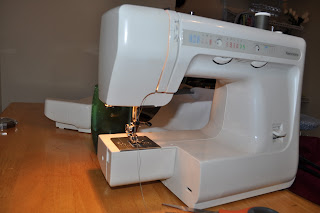 It's an awful thing. It was $5 at a garage sale. It seems to hate needles. It likes to break them. The "gas pedal" has no slow. If you're going to sew with this machine, you're gonna sew fast! Just try to sew bias tape straight and on high speed.

Also, I decided not to buy any new fabric for this project. I started off with the leftover fabric from the table runner (see the sneak peek) and some flannel left over from making cloth baby wipes last summer. 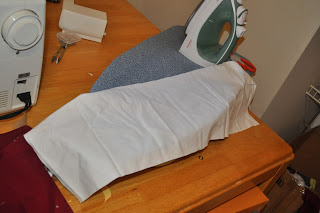 I had enough to make three layers of flannel. To this, I added a layer of grey flannel. Only, I didn't have a big enough piece--so I sewed two smaller pieces together. 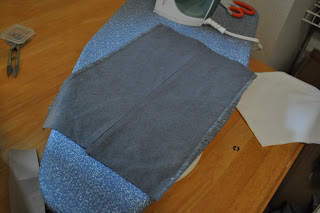 The plain grey looked kind of boring (on the back of the table runner, no one sees it). So I appliquéd a heart (fabric leftover from a valance) to the grey flannel. 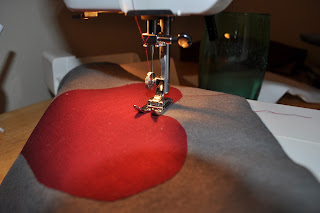 The contrast between the two sides was a little too much, so I used another scrap of the "main" fabric to create another appliqué for the grey side. 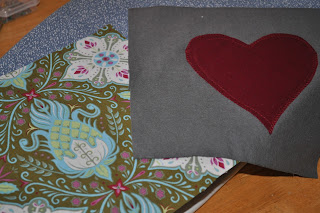 But then, I used red thread. It was ugly. Out came the seam ripper for the first time. The thread was replaced with a blue that unexpectedly matched perfectly (thread was originally bought for a project that turned out to be impossible on my $5-high-speed machine). 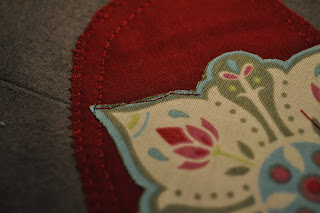 Four layers of flannel probably was enough, but I despise getting scorched fingers when lifting pans out of the oven. To be safe, a few scrappy pieces of terry cloth were cobbled together. I used a big zig zag because proper seams would have been too bulky. I also didn't bother to change the thread because this layer is sandwiched and will not be seen. 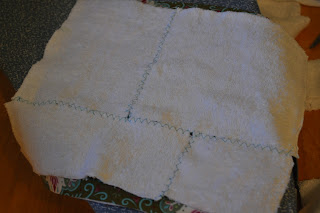 Then I "quilted" all the inside layers together in a starburst and sewing from the center to the edge. 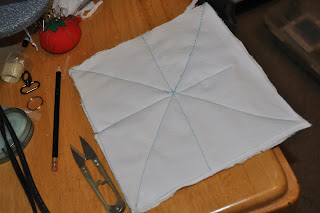 Then the table runner fabric was added on and quilted with three lines following the pattern on the fabric. 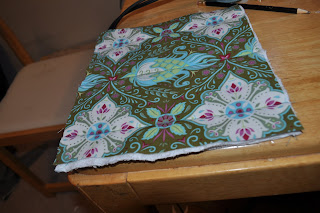 Then, the grey flannel with appliqués was sewn on, edges trimmed and finished with red bias tape (left over from the table runner. My machine also does not do buttonholes, so that part was hand sewn. The button is vintage and I think is from a bag of buttons that my sister-in-law's mom gave me. 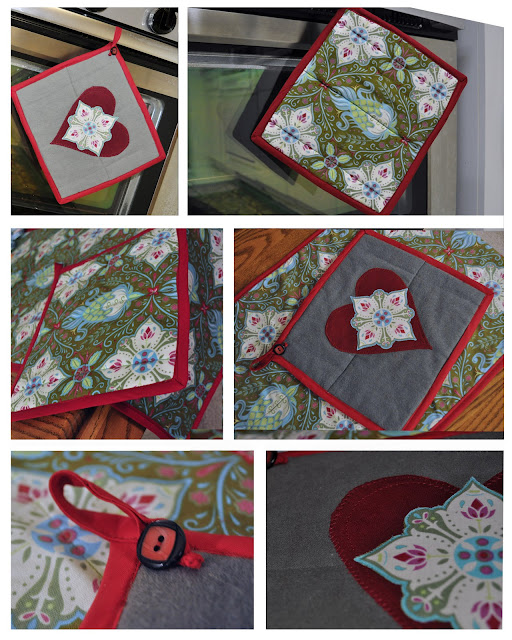 Cute. They turned out nice.