Last weekend was the first cookie party that I've ever attended. Originally, I had decided not to bake anything this Christmas (baking with a baby is HARD, yo--cranky or not). So I had to bust it out and frantically bake last week in between naps. The cookies were finally decorated with the baby in one arm and frosting in the other, three hours before the party. Again, I got the recipe off of the internet. Again, the idea is from Prudent Baby. I'll start branching out and doing my own thing soon hopefully. For now, having the plan done is so much easier.
Here are the results: 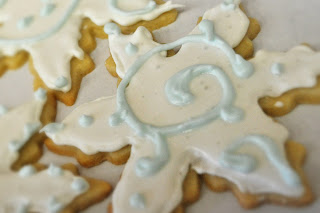 I love how Royal Icing has such a smooth finish-- if I had more time I would've popped those bubbles in the frosting. 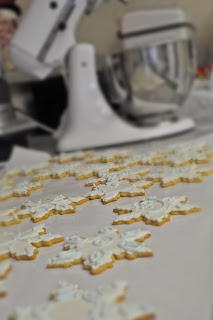 This was my first attempt with Royal Icing.  The directions call for it to dry overnight. Procrastinator that I am, I didn't have that long. I let them sit for two hours and then did the blue accents. The icing was a little squishy still. When I packed them up for the party it was around the 5 hour mark and they were fine. 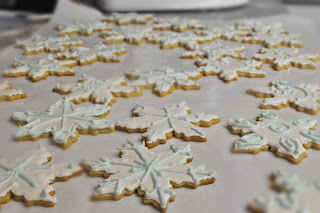 The icing gets rid of any imperfections in the surface of your cookie, and makes piping go on easily. The monotony of making dozens of identical snowflakes paid off in the decorating stage. It was incredibly satisfying to make each one a little different with the blue frosting.
Posted by Nichmo